The Road to $10,000 Profit from my Side Project Slack Bot 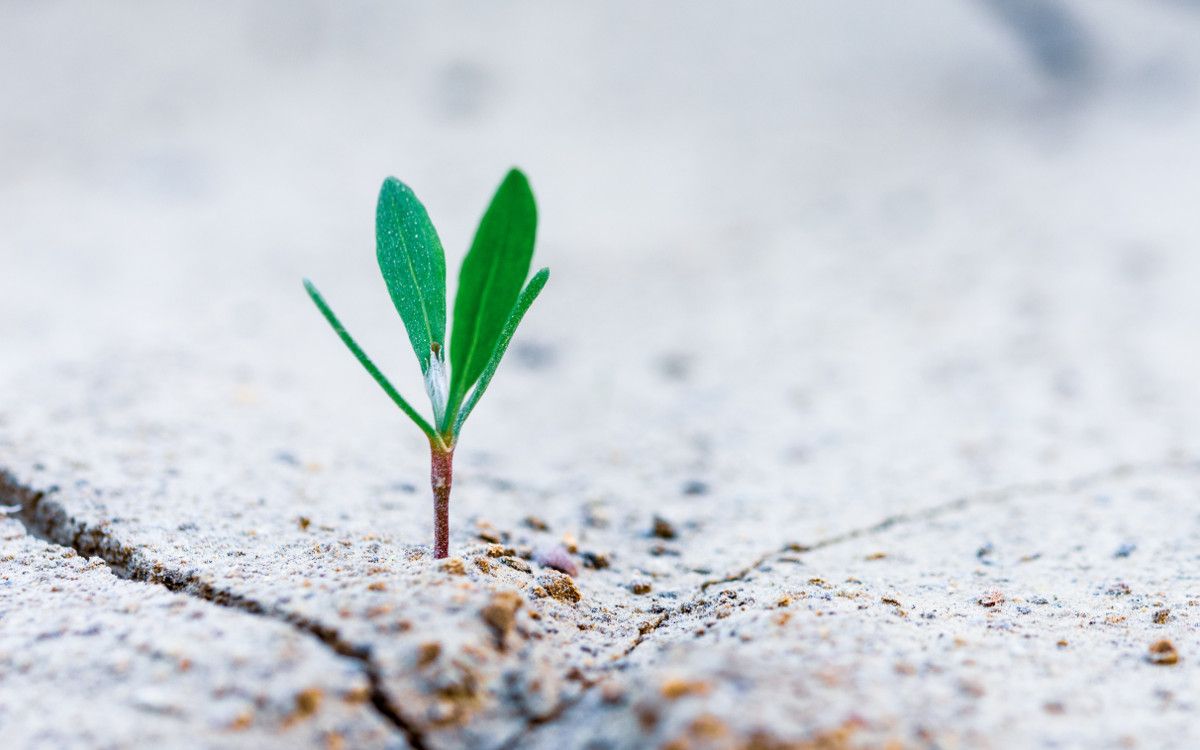 
My side project Slack app Abot has recently reached a milestone of $10,000 total profit. In this blog post, I describe how the project has changed during the last year and what I am doing to grow and promote it. I also share some details about the usage stats and revenue.

You can check out my previous post for more details about the origin and features of Abot. Long story short it is a highly-configurable Slack addon that that lets you communicate anonymously with your team members.

Abot started as a free-to-use weekend project at the beginning of 2017. I’ve introduced a one-time lifetime purchase option around six months afterward. After validating the commercial interest and getting featured on Hacker News, on March 2018, I’ve decided to “get serious” and introduce subscription based pricing.

As you can see in the chart above the total profit so far has been over $11k. Here’s a profit distribution per subscription plan:

Chart does not include profit for teams with over 500 users

Yearly upfront purchases account for most of the profit. If I don’t include them a recurring monthly profit is currently around $1,000, with new subscribers narrowly outpacing the churn.

Majority of the clients are from the US and Canada, but surprisingly South Korean people also find value in anonymity on Slack. 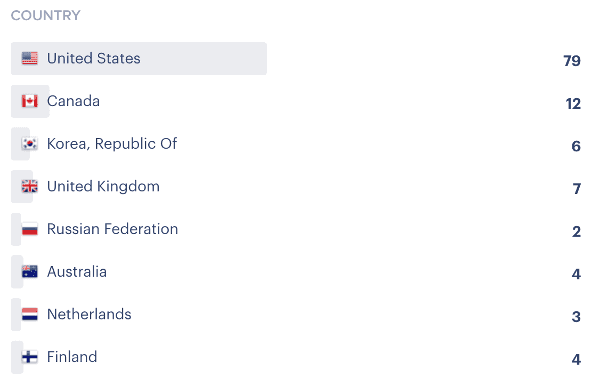 So far over 3k Slack teams tried out Abot. With ~100 paying subscribers conversion rate balances around 3%.

The total number of Slack users from all teams that registered so far is over 400k. That might look impressive, but the number of total active users in the project history is only ~12k. It could be caused by the fact that many teams apply the configuration settings to limit who can use the anonymous communication features. 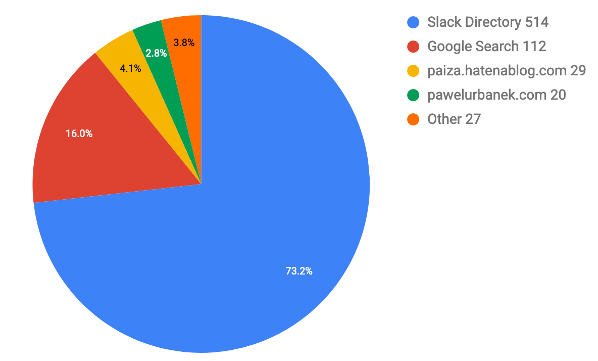 You can see, that the majority of clients is coming from the official Slack directory. Google organic traffic is on the second place.

Here’s a chart showing the number of new teams that signed up to Abot free trial during the last 140 days:

As you can see there’s no trend whatsoever, just random ups an downs. I’d love to see the hockey stick here, but signups just oscillate between 0 and 15 new teams daily.

I regret not having started to collect those anonymized stats earlier. To be GDPR friendly, I completely delete all the data of teams who removed Abot addon from their Slack workspace. I cannot reclaim older stats. Maybe a longer trend would be more optimistic.

Google organic traffic currently accounts for ~20% of project signups. When Googling my target keyword “slack anonymous”, the top two results are direct links to Abot. Not sure if it is a good SEO rating effect or just low competition.

One way or another I assume that Abot landing page must have a reasonably strong SEO authority because it appears in the featured snippets for some of the keywords: 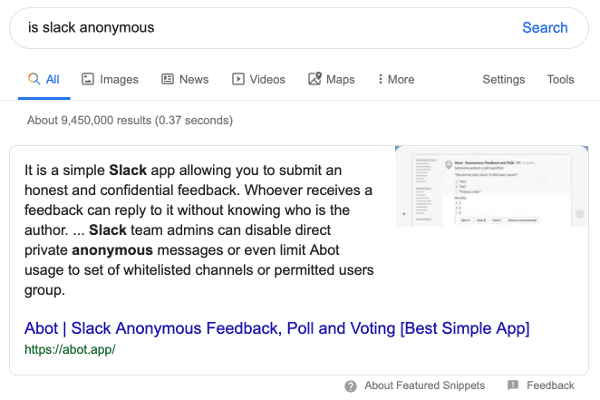 Recently I took a deep dive into Ahrefs. It’s a fantastic tool that helped me discover severe shortcomings in the project’s landing page SEO. It’s a bit pricy for me to keep paying for the subscription but one month was enough to apply numerous SEO optimizations. Ahrefs have a YouTube channel that’s worth checking out if you want to learn SEO.

I also regularly backlink Abot landing page from my blog posts to keep those SEO juices flowing. I even experimented with moving some of my articles to Abot domain. I wanted to boost its SEO rating, but in the end, I decided that a single blog with superior domain authority and traffic has more value than two mediocre ones.

BTW Backlinko is likewise an excellent source for learning SEO. You can also check out my other blog post for some actionable SEO tips that actually work, and you can start using right now in 2019.

So far, the project gathered few organic blogs and press placements. One Asian blog that covered Abot is probably the cause for multiple clients from South Korea. 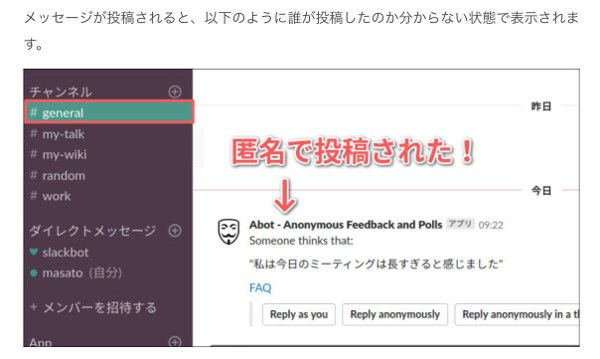 Abot featured in an Asian blog

I’ve hired a marketing agency to get project covered by tech press, but they failed. Responses they’ve received from pitched journalists were… insightful.

I find the product terrifying, would quit any company that used it, and have no desire to write about it.

I understand that anonymous feedback and communication is a controversial topic and a potentially double-edged sword. After reading this comment, I’ve added more features allowing Abot Slack admin users to configure who can send anonymous messages in their teams to avoid abuse.

Now some teams use Abot only with whitelisted channels and direct anonymous messages disabled:

We are using Abot to create anonymity for our users, allowing them to post about issues and concerns without fear of backlash or retaliation. We want a safe space for hundreds of users to converse and clarify.

My blog is not the best source of signups, however writing about the project in the first place is what gave it a kick start after the Hacker News featuring. It’s possible that the project would no longer exist if it weren’t for that.

Starting a commercial side project is a massive investment of your free time with a very high chance of total financial failure. I’ve built a dozen side projects so far, and Abot is the first one to make some decent profit.

To the contrary, you cannot “fail” with a blog. Even if you don’t like what you wrote after some time, you can always just remove it.

BTW this blog is also a profitable side project in itself. Revenue is generated from sponsorship ads and Digital Ocean affiliate programs but that’s a story for another blog post.

If you want to build a SAAS as a solo founder, running a blog is a must-have. It’s much simpler to attract and redirect traffic using content marketing than to pay for it. Buying ads for a not yet validated idea with no active users is burning money.

I estimate that around 500 hours of my after-hours worktime was dedicated to Abot so far. It accounts for ~$20/hour “salary”. I don’t even count the costs of infrastructure, marketing, outsourced development, and taxes here. Still, it’s quite amazing to see the people from all around the world use and pay for the app that I wrote from scratch.

Honestly, I thought that the first version of Abot I hacked over a weekend two years ago is the final one. 1171 commits later I’m still looking forward to adding new features and growing the project.