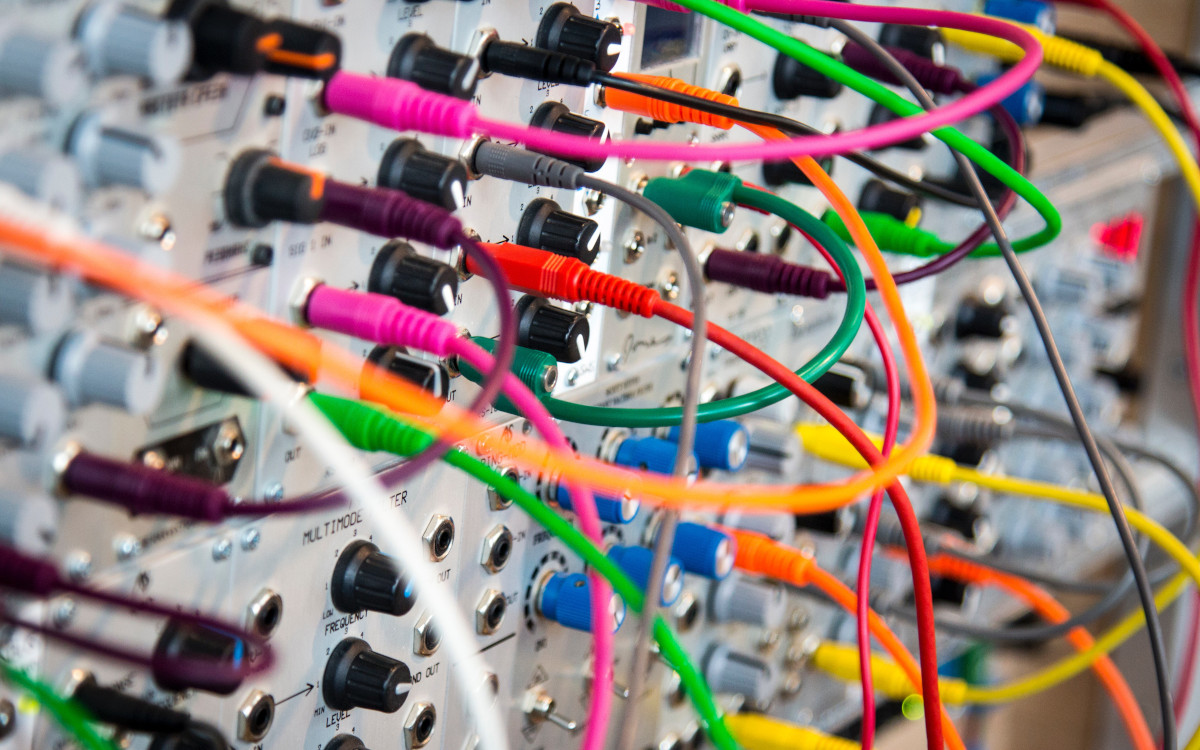 Interpreting the output of SQL EXPLAIN ANALYZE might seem like dark magic at first. I’m starting a series of blog posts where I’ll be well… explaining it based on common use cases from web applications. Read on if you’ve ever wanted to start using EXPLAIN ANALYZE for debugging slow PostgreSQL queries but did not manage to wrap your head around it. In the first part, we’ll discuss how the PostgreSQL query planner decides whether to use an index.

Examples in this tutorial are based on Ruby on Rails. However, SQL query analysis tips apply to all the web technologies like NodeJS, Python Django, or Elixir Phoenix.

unused_indexes is one of the more useful helper methods from rails-pg-extras gem (check out this article for info about of PG Extras implementations for other languages). If your production app has unused indexes, there’s an unnecessary overhead of updating them with each write operation. They also bloat the disk usage and increase the time for backup/restore operations.

It might not be obvious why your queries are not using an index. Let me guide you through the process of debugging it on the example of a soft-delete feature. We’ll distinguish objects that are currently soft-deleted by using an indexed datetime column discarded_at.

For those readers not familiar with Ruby on Rails: we’re creating a users table with email, discarded_at, and created_at columns. Both datetime columns are indexed. We can fetch all kept user objects with User.kept and soft-deleted with User.discarded method.

We’ll examine an EXPLAIN query plan for sample queries using this model. Rails supports a built-in explain method for ActiveRecord query objects. To go deeper, you’ll also need the JSON format and ANALYZE feature that’s not supported natively. I can recommend my activerecord-analyze gem. It will become obsolete as soon as this four years old PR is merged to Rails master.

For other web stacks, you’ll have to prefix your SQL query with EXPLAIN (ANALYZE) to generate a query plan while running it. Example:

I’m using PostgreSQL version 11, and the users table was seeded to ~100k objects. ~20% of objects were marked as soft-deleted. You might get different results from a similar setup. This post aims not to accurately explain when PostgreSQL uses indexes but rather to give you an insight into what variables can affect it and how to analyze this process.

How to check if SQL query will use an index?

Let’s now see what query plan is generated when we fetch all non-deleted objects:

You can see that although there’s an index on the discarded_at column, the query planner instead decided to use a Seq Scan with Filter operation. It’s not a mistake, and your index is not broken. It means that in case a query is expected to return a high portion of an underlying table in no particular order, then using a sequential scan is usually faster. With index database first reads its metadata and then comes back to the table to get it.

There’s a handy trick to check if the index will be used if a planner is forced to do it. Execute those SQL commands in your database:

Make sure to change this setting for the same connection that your framework is using. For Rails, you'd need to run ActiveRecord::Base.connection.execute("SET ...")

Changing this PostgreSQL setting discourages the use of Seq Scan operation if possible. It helps test your queries’ behavior on a smaller dataset where the query planner is unlikely to use indexes. A perfect use case is testing if the database will use a newly added index in the development environment before deploying it to production.

This setting is applied on a per-connection basis. However, some tech stacks reuse connections in a pool, so you should never use it in your production environment.

You can now see the Index Scan node using index_users_on_discarded_at in Index Cond.

And see how fetching the soft-deleted records will work:

You can see that since the query is expected to return only a subset of the table, the query planner defaults to using an index.

Another perfect use case for an index is sorting the results with an ORDER BY clause:

Since indexes are ordered by default, an additional Sort operation is not needed.

If you request the results in a descending order, the same index can still be used:

Here we can see Index Scan Backward instead of Index Scan on index_users_on_discarded_at index.

Alternative to ordering results with index is an in-memory Sort operation. You can force query planner to use Seq Scan and Sort instead of Index Scan by disabling enable_indexscan and enable_bitmapscan PostgreSQL config variables. Disabling these variables on a copy of a production dataset can be useful to measure how much of a performance boost you get from indexes.

Let’s go a bit deeper and tweak PostgreSQL internals. Lowering the amount of work_mem available will force a sort operation to take place on disk instead of a memory:

Just don’t do it on production!

Can PostgreSQL use multiple indexes for a single query?

I’ve been confused by this one for a long time. The common knowledge is that PostgreSQL planner can only use a single index per query. Let’s see it in action by querying for soft-deleted objects created over 90 days ago:

You’ll probably agree with me that we’ve reached a stage where quickly grasping the output of a query plan is no longer possible. To simplify the analysis we’ll use a free visualizer tool.

It requires a JSON output format. If you’re using activerecord-analyze gem you can execute this code:

For other tech stacks, you’ll have to prefix your query with:

After pasting the JSON output into the visualizer, you should see a similar graph: 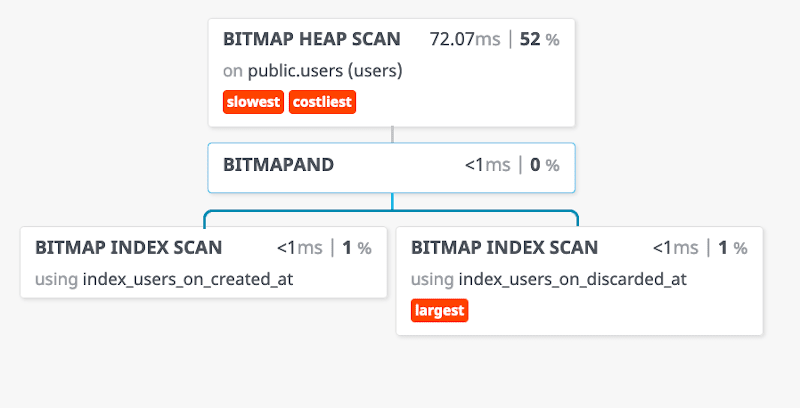 Now we can clearly see that both index_users_on_discarded_at and index_users_on_created_at are combined using the BITMAPAND operation. You can check out the PostgreSQL docs for more info on using multiple indexes.

Will PostgreSQL use my partial index?

Optimizing so-called “NULL” indexes can vastly reduce the amount of disk space used by your database. By “NULL” indexes, I mean ones that contain a high ratio of NULL values. In many cases, NULL is a legitimate value that conveys meaning, but often you’ll never search by it. In our case, the NULL discarded_at column means that the object has not been soft-deleted.

For the purpose of this tutorial, let’s assume that we want to remove NULL values from our index_users_on_discarded_at. It will reduce disk usage and overhead of updating it. We’ve also indexed the created_at column, so it is enough to make the queries for kept objects efficient:

In this example Index Scan uses only the index_users_on_created_at index and discarding soft-deleted records using a Filter operation.

However, one use case prevents us from removing the index_users_on_discarded_at index entirely. Let’s assume that we periodically remove objects that were soft-deleted over a month ago:

This query uses our index and would be inefficient without it.

Since only a small portion of our objects is soft-deleted, this index contains mostly NULL values. You can confirm that with the rails-pg-extras null_indexes method

Let’s convert this index to exclude NULL values and double-check if our query will still use it.

Always use algorithm: :concurrently if you're adding or removing index to an existing production table. It prevents full table lock and potential downtime.

Run the migration, and let’s check our query:

Don't forget to disable enable_indexscan and enable_bitmapscan to force index scans if you're using a development database.

Our new index_users_on_not_null_discarded_at is used, and we’re no longer indexing NULL values. Running null_indexes confirms that:

As you can see, EXPLAIN ANALYZE allows you confidently make changes to your database based on solid evidence instead of a gut feeling.

Setting up correct indexes is one of the most effective ways to optimize your PostgreSQL database performance. EXPLAIN ANALYZE is insanely useful to help you understand how to do it correctly without blindly guessing what will happen if you add or remove yet another index.

I hope that this post was a relatively lightweight introduction to using EXPLAIN ANALYZE for a deeper analysis of what’s going under the hood of your database engine. We’ve just scratched the surface so stay tuned for the next part of this series. We’ll take a closer look at table join operations.